The Gift of Longevity
Article

The Gift of Longevity

With the Holiday Season around the corner, wellbeing wishes for the New Year are in order. Paramount among them is “good health.” In fact, promoting healthy living is a prerequisite to enhancing prosperity, a point that is the focus of the third UN Sustainable Development Goal (UNSDG): “good health and well-being.”

Three of the targets of good health and well-being for 2030 focus on reducing further the global maternal mortality ratio, ending the preventable deaths of newborns and children under 5 years of age, and ending the epidemics of AIDS, tuberculosis, malaria and other diseases. The implication of improving the above dimensions is the increase in life expectancy, that is, the average number of years people are expected to live. Life expectancy, therefore, is a measure used to describe one of the dimensions of “good health.”

How do the countries that we study perform in the “gift of longevity” ? And what is the relationship between life expectancy and the money that is allocated to health care? 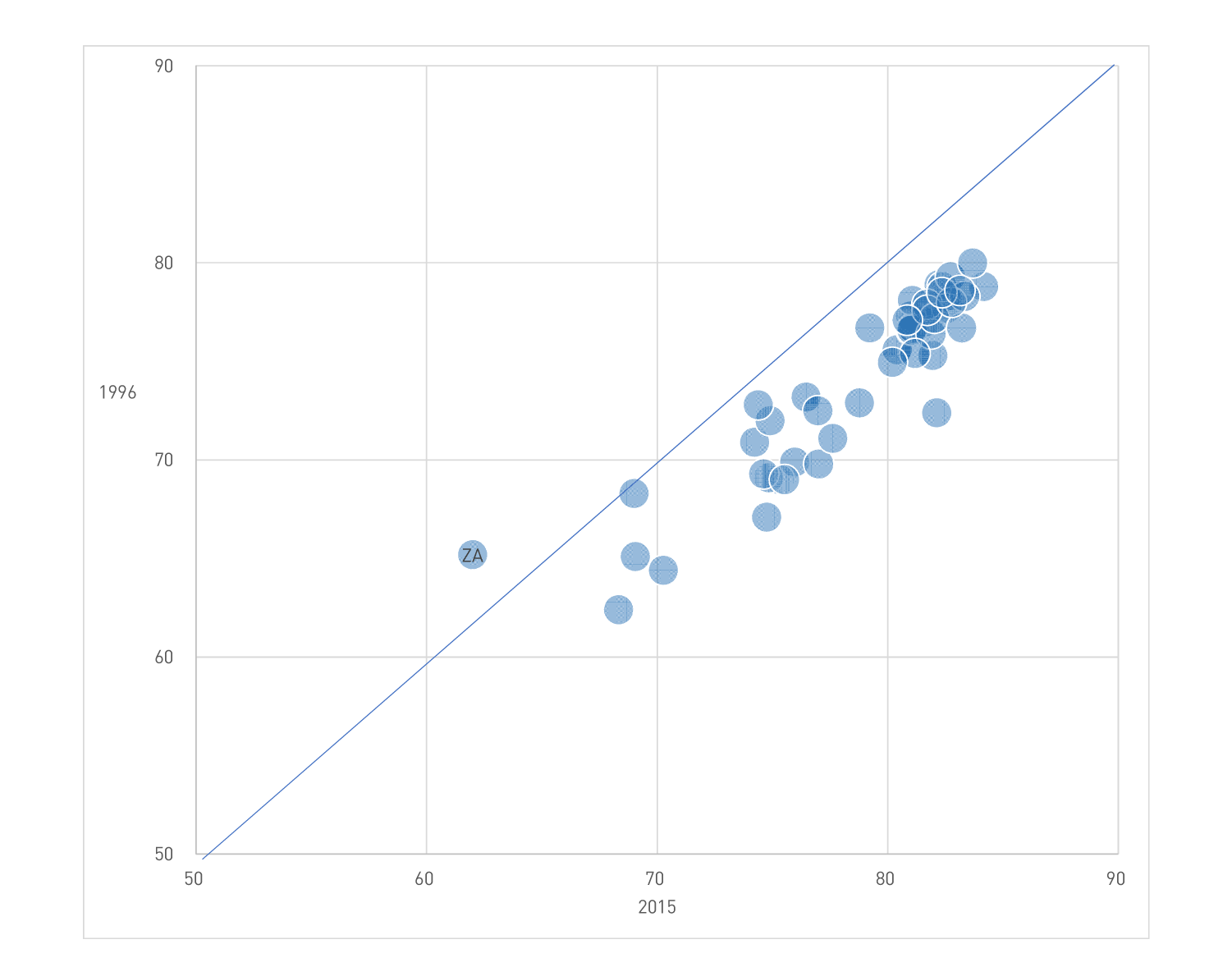 A factor that contributes to the increase in longevity is the amount that each economy spends on health care. Figure 2 captures the relationship between changes in spending on health care and changes in life expectancy for the economies we study between the years 1996 and 2015. The vertical axis provides the change in the total health expenditure per capita in nominal $US. The horizontal axis outlines the changes in the life expectancy.

All the economies we study experienced an increase in spending on health care. The five countries with the highest increase are depicted by the blue curves in the figure and in order of the largest difference are: Switzerland, the USA, Norway, Ireland, and Luxemburg. The increase in spending in health care per capital ranges from $5,749 for Switzerland to $3,501 for Luxemburg.

Conversely, the five countries that realized the highest improvements in life expectancy are denoted by the orange curves. By size, they are the Republic of Korea, Brazil, Estonia, Chile, and Turkey. The increase in number of years is between 9.7 and 6.5.

Spending in health care does contribute towards improving the number of years a person lives. So, does one need to be in the country that allocates the highest spending per capita for health care in order to enjoy higher life expectancy? Not necessarily… Taking the most recent data that we have for USA as an example, we notice that in 2016 the country had the highest total health expenditure per capita equal to $ 9,882. Yet, it is ranked 31st in life expectancy at birth, below Hong Kong, Australia, Norway, Greece, and Chile. Why? In addition to the expenditure in health care, issues related to broad socio-economic dimensions are very important as well. From the quality of the infrastructure to the type of lifestyle and diet, from education to the available public services, a host of variables contribute to the longevity of a country.

I hope that you will enjoy the season, celebrating it with family and friends. I have no doubt that being merry during the holidays may also increase your life expectancy.

On behalf of all of us here at the IMD World Competitiveness Center, I wish you a joyful holiday season and a happy, prosperous and healthy 2020!