Women discover “Strategies for leadership” that can transform their lives

Learning from horses to discover yourself 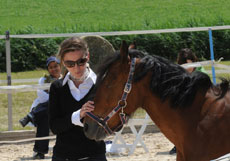 It’s a fact that women are increasingly serving a more important role in business. As governments and organizations throughout the world help facilitate the advancement of female executives, IMD highlights a program dedicated only to women.

The aim of IMD’s Strategies for Leadership is to empower women executives by preparing them to improve leadership potential and building up meaningful networks.

“You have to be authentic and sincere to succeed,” said program director, IMD Professor Ginka Toegel, as a premise to the four-day open enrollment program that she organizes twice a year.

Toegel, whose background combines a PhD in Psychology with a PhD in Management, is convinced that effective leadership is not just about being a good visionary or strategist; “Leadership is about energizing people, making them enthusiastic to achieve their goals.”

Horses may be used for executive education, Toegel said, because they are incredibly responsive to relationships and hierarchies. “We can use them as a metaphor.” Using horses helps participants fully understand the complexities of several questions. “Good leaders must ask, ‘How do we deserve the trust of the people we lead? How do we gain their absolute commitment and equally, how can we prevent the uncertainty that makes a horse stop in its tracks,” she said.

Horses want to be led, but they want to make sure that the person who leads them deserves to be a leader. They need to sense assertiveness and confidence, but only a certain degree of authority. Like people, they will follow authority, without the feeling that they are being led.

The difficulty today, Toegel acknowledged, is that too many women are still under the misconception that they need to be like men to succeed. “It is important that they accept that they can lead differently,” she stressed. As horses aren’t gender-biased, participants discover that they will lead more effectively by being themselves.

As well as assertiveness, women must continue to exhibit the communal values of friendliness, warmth, supportiveness and caring if they are to be perceived as authentic.

Horses notice a lack of authenticity immediately. “It’s absolutely spectacular. The horse will either not budge or stop in its tracks. You learn a lot about your leadership style.”

“The program taught me that I can be authentic and still be successful,” Katja Hofem-Best enthused. She insisted that she has never been more successful since following the IMD program, including in making radical decisions in her personal life. Even her CEO has congratulated her on her more relaxed attitude.

“I learned to just let go: it was like cutting the Gordian knot,” she said. Hofem-Best admits that she was always putting herself under pressure, but that the experience with horses taught her to just be herself. “It was the best thing I have ever done.”

“A horse doesn’t care if you’re wearing a suit or a skirt,” she said, referring to the time when she was first promoted to a position of MD in a male-dominated environment. She cut her long blond hair and started wearing suits, which was a complete mistake, she said in retrospect. “A woman who tries to be a man makes men insecure.”

On the other hand, being with other women who shared her feelings and preoccupations despite coming from different cultural and business backgrounds was an eye-opener, she noted. It allowed participants to open up. She personally felt more at ease this time than she had in the numerous coaching programs she had attended before.

Toegel believes that the program functions better in a single sex format because it allows self-discovery unfettered by the competitive streak between women and men.

Taina Mäkijärvi is not convinced that gender is an issue, since leadership, she believes, is a question of attitude. She did however immensely appreciate an environment that was “concrete, open and neutral.” She found it refreshing and relaxing to discover that other women dealt with the same predicaments as her own.

But the highlight of the program, the part that inspired her most, she said, were the sessions with the horses. How do you surmount your fear of a 500 kg beast that could trample you, she asked herself. She decided on a very simple plan: she would talk to the horse as she talks to her own pet dog and she would talk to her in Finnish, her mother tongue.

“To my astonishment, my very simple plan worked: the horse began to follow me. It was instantaneous and I felt tremendous joy. Furthermore, the more I connected with the animal, the better it became.”

Mäkijärvi decided to stick to simple plans from then on. She also realized that she had the ability to get things moving, when she “put the energy on the table.”

Like Hofem-Best, she had discovered the benefits of behaving more spontaneously. “I used to spend a lot of time in preparation, but now I can achieve more by trusting my true self,” she said.

She admitted, that the idea of being with horses wasn’t at first easy for everyone. Yet, the process of mastering or overcoming fear was enlightening.

The idea is to lead horses, not to ride them, Ginka Toegel pointed out. “Some people ride well, but if they still cannot connect with the horse, they are not likely to be good leaders,” she ventured. Related program
Strategies for Leadership
Leadership
A highly-experiential and immersive leadership program so, as a senior women executive, you can develop greater influence and impact by discovering your authentic, most effective leadership style.​
Share
Get shareable link